The technique used for these stunning, traditional Marian images is “Italian Press Gold metal Foil” which is applied by a 60 year old Italian machine. Each image has these gold highlights. You need to see these, Internet images do not do them justice. Money back guarantee on these. If you don't like them once you receive them, mail them back to us and we will refund your payment in full.

Bulk discounts on these items. Mix and match. Free shipping!

Explanation of the Images:

Our Lady of Good Help (Champion, WI USA)- The only first and only Church approved Marian apparition in the United States. In America, The National Shrine of Our Lady of Good Help at Champion covers the peace-filled holy ground deemed ‘worthy of belief’ by authority of the Catholic Church, that Mary, the mother of Jesus, appeared. Identifying herself as ‘The Queen of Heaven who prays for the conversion of sinners,’ Mary appeared in October 1859 to a Belgian immigrant woman, Adele Brise, on the grounds of Champion Shrine, when the town was known as Robinsonville. In a series of inner locutions, Our Lady instructed Adele to pray and do penance for sinners and to teach children their catechism. She admonished Adele to "Go and fear nothing. I will help you." Hence, the name given to the apparition is "Our Lady of Good Help."

Our Lady of Fatima (Fatima, Portugal): Following several visions of an angel in 1916, the Blessed Mother appeared to three children at Fatima in 1917, urging them to perform acts of penance to pray the Rosary for sinners and for the conversion of the world. She stated that, if these wishes were not followed, a more terrible war would befall the world. The children heeded her message. Two of them, Jacinta and Francesco, died while children and have been canonized. The third child, Lucy, has had her cause for canonization introduced.

Our Lady of Grace-Our Lady of the Miraculous Medal (Rue du Bac, Paris, France): On 27 November 1830 Catherine Laboure, a nun with the Daughters of Charity, reported that the Blessed Mother appeared to her in an oval frame, standing upon a globe. She wore many rings set with gems that shone rays of light over the globe. Asked why some of the gems did not shed light, Mary reportedly replied, "Those are the graces for which people forget to ask." Sister Catherine then heard the Virgin Mary ask her to take these images to her confessor, telling him to put the images on medals which would provide great graces to those who wore them.

Our Lady of Guadalupe (Tepevac, Mexico): In December 1531, the Blessed Mother appeared in a series of five apparitions to a peasant named Juan Diego. She asked that a shrine be built to her on that location and that he trust her. Some of her words are, Hear me and understand well, my little son, that nothing should frighten or grieve you. Let not your heart be disturbed. Do not fear that sickness, nor any other sickness or anguish. Am I not here, who is your Mother? Are you not under my protection? Am I not your health? Are you not happily within my fold? What else do you wish? Do not grieve nor be disturbed by anything." The image of the lady appeared on Juan Diego's tilma (cloak) when he opened it to show the bishop the roses he picked in December at the bidding of the Lady. The image is rich in symbolism for the Aztecs, many of whom were converted through it. 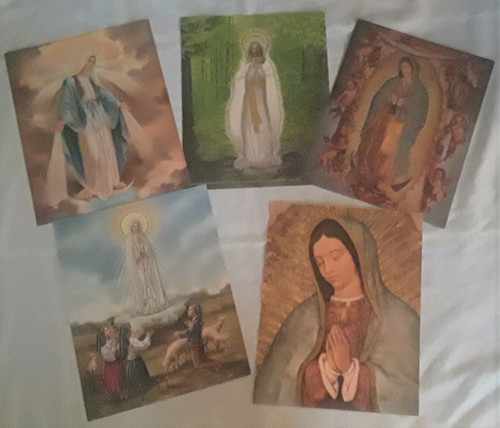